A recent survey (the largest of its kind) performed random tick checks on dogs across the UK, showed that the parasites are found on one third of dogs.

Ticks can carry a range of diseases, including Lyme disease which has the potential to cause serious health problems such as meningitis and heart failure. However in most cases, it’s fatal.

Bristol University carried out a study last year where they examined almost 15,000 dogs from across the UK, and just under a 1/3 (31%) of these dogs checked at random during a visit to the vet were found to be carrying a tick. The parasites are present all over the UK, with the highest risk area being Scotland, East Anglia and the South West. The research also showed that the risk can be just as high in urban areas as in rural areas.

Ticks don’t jump or fly, they climb onto clothes if a person brushes against something that the tick is holding on to. More often than not, they can be found in woods, urban parks, heathland, fields and also gardens. Lyme disease is transmitted by the bite of a tick infected with Borrelia burgdorferi bacteria. The tick acts as a vector, in much the same way as that a mosquito transmits malaria when it sucks the blood from a person, the tick does the same to an animal or person.

According to Public Health England, it’s estimated that there are 2,000 to 3,000 new confirmed cases of Lyme Disease in England and Wales each year, although not all cases are confirmed by laboratory testing. About 15% of cases are in people who have returned from abroad.

Lyme disease can be treated with antibiotics. But if left untreated it can seriously damage a person’s health, including affecting the nervous system, causing meningitis or heart failure.

This is why its so important to check your dog regularly for ticks, especially important during the warmer Summer months but still essential the rest of the year too. If your dog has long fur it is a little harder to spot the nasty things but if you spend the time to thoroughly check over the whole of their body, pulling the fur apart so you can see right down to the skin. If you do find one, you can use either tweezers to pull them out or a tick remover like the one pictured below. Its important you get right down to the legs as you remove them, as only pulling the head off and leaving the legs embedded in the skin can cause further infection and illness. 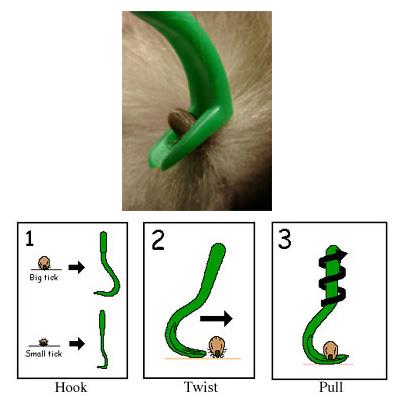 Each time we groom your dog at Hello Pets, we examine them closely all over to check for any parasites or other abnormalities. This is one of the reasons why regular grooming is so important! It maintains the overall well-being of the dog – keeping them happy and healthy.

If you’re worried about parasites on your pet or want to be shown how to properly check for them, don’t hesitate to get in touch with either myself (Kirsty) or another member of the team to discuss anything further.